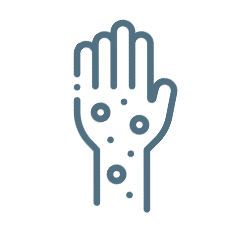 Nevus (plural: nevi) is the medical term for a mole. Nevi are very common.  have between 10 and 40. Common nevi are harmless collections of colored cells. They typically appear as small brown, tan, or pink spots. You can be born with moles or develop them later. Moles that you’re born with are known as congenital moles. However, most moles develop during childhood and adolescence. This is known as an acquired nevus. Moles can also develop later in life as a result of sun exposure.

There are many types of nevi. Some of them are harmless and others more serious. Read on to learn about the different types and how to know whether you should get one checked out by your doctor.

1)   Congenital nevus: A congenital nevus is a mole that you’re born with. They’re generally categorized as being small, medium, or giant in size. They vary in color, shape, and consistency. Some congenital nevi cover large areas of your body.

2)   Common nevus: A common nevus is a smooth, round mole that’s all one color. You can be born with them, but most people develop them later in childhood. Common nevi can be flat or dome-shaped and may appear pink, tan, or brown.

3)   Dysplastic nevus: Dysplastic nevus is another name for an atypical mole. These moles are benign (noncancerous) but often resemble melanoma. They may feature different colors, appear asymmetrical, or have odd borders. People with dysplastic nevi are at higher risk of developing melanoma.

4)   Blue nevus: A blue nevus is a blue-colored mole that can be congenital or acquired. A common blue nevus may appear flat or dome-shaped with a color ranging from blue-grey to blue-black. Blue nevi are commonly found in people of Asian descent.

5)   Miescher nevus: It is a brownish or skin-colored, dome-shaped mole that commonly appears on your face or neck. It’s typically firm, round, smooth, and may have hair coming out of it.

6)   Unna nevus: they are soft, brownish moles that resemble Miescher nevi. They’re typically located on your trunk, arms, and neck. An Unna nevus may resemble a raspberry.

7)   Meyerson nevus: they are moles surrounded by a small ring of eczema, which is an itchy, red rash. They can appear on your skin regardless of whether you have a history of eczema. Meyerson nevi affect men nearly three times as often as women. Most develop around age 30.

8)   Halo nevus: It is a mole with a white ring of unpigmented skin around it. Over time, the mole in the center begins to fade from brown to pink before disappearing entirely. It’s not uncommon for someone to have several halo nevi at different stages of fading.

9)   Spitz nevus: A Spitz nevus is a raised, pink, dome-shaped mole that typically appears before age 20. Spitz nevi can have different color. They may also bleed or ooze. This can make them hard to distinguish from a melanoma.

10)   Reed nevus: It is a dark brown or black, raised, dome-shaped mole that most often affects women. These moles can grow quickly and may be mistaken for melanoma. They’re sometimes called spindle cell nevi because of the way they appear under a microscope.

11)  Agminated nevus: It refers to a cluster of similar moles located on one area of your body. These groups of similar-looking moles can vary in appearance and type.

How are they diagnosed?

If you’re unsure of what type of nevus you have, it’s best to have your doctor or dermatologist take a look.

If your nevus seems to be changing or your doctor isn’t sure what it is, they might perform a skin biopsy. This is the only way to confirm or rule out skin cancer.

There are a few ways to do this:

How are they treated?

Most moles are harmless and don’t require treatment. However, if you have a mole that’s cancerous or could become cancerous, you’ll likely need to have it removed. You can also choose to have a benign nevus removed if you don’t like the way it looks.

When to see a doctor

Try to get in the habit of examining your skin once a month. Keep in mind that skin cancer can develop in areas that you can’t easily see, so use a mirror or ask a friend to help you if you need to.

Doctors have a developed a system known as the ABCDE method to help people identify signs of skin cancer. Here’s what to look for:

You can keep track of your existing moles and changes by using this body map and chart from the American Academy of Dermatology.

Nevi come in many shapes and sizes but most of them are harmless. Still, it’s important to keep an eye on your moles because changes could indicate a problem. If you’re worried about one or more of your moles, don’t hesitate to get it checked out by your doctor. They can do a biopsy to rule out skin cancer.

Reviews (0)
Write A Review
Our Services